To share your memory on the wall of Herbert Richardson, sign in using one of the following options:

Print
Herbert Luther Richardson of Chandler, Texas stepped into Heaven on July 29, 2020 at the age 93. He was born on December 29, 1926 to parents Jesse Elgie and Mary Elizabeth (Duff) Richardson.

He is preceded in death by his parents, five ... Read More
Herbert Luther Richardson of Chandler, Texas stepped into Heaven on July 29, 2020 at the age 93. He was born on December 29, 1926 to parents Jesse Elgie and Mary Elizabeth (Duff) Richardson.

Herb was born in Livingston, Texas where he attended Livingston High School. After graduation, he enlisted in the US Army where he served during World War II. Upon returning home, he began his post-secondary education at Tyler Junior College where he was a scholarship athlete earning an Associate Degree, and numerous awards including Men’s Basketball All-American and National Champion. After graduating TJC, he continued his education at the University of Houston where he proudly represented the Cougars on the Men’s Basketball Team. There he received a Bachelor's degree in History and Kinesiology.

Herb was united in holy matrimony with the love of his life Joey, otherwise known as Joann Floyd (Gentry) Richardson, on June 3, 1952. Their union was blessed with four children, Mike, Brady, Jesse and Linda (Richardson) Bone, and he just loved his eleven grandchildren and five great-grandchildren.

Supporting his family led him to Mount Pleasant & Van High Schools as Head Boys Basketball Coach and Teacher for a combination of 5 years. Known as “Coach Rich”, Herb’s career quickly advanced to the college level taking on the Assistant Boys Basketball Coach of Tyler Junior College under Coach Wagstaff. After seven years, he transitioned into the role of Counselor but soon rejoined the basketball program, however this time, as Head Coach of the Lady Apaches. It is in this role that Coach Rich truly excelled even taking teams to numerous National Basketball Tournaments.

He retired from TJC in 1983 but soon returned to the Head Coaching position for one final year before hanging up his whistle for good. In exchange, in 1995, TJC hung their prestigious Circle of Honor Gold Jacket across his shoulders in honor of the legacy that he’d created while serving young people for 32 years.

Over the years, Herb was recognized with many more awards, however, he would say that his greatest was his salvation and acceptance of Jesus as his personal Lord and Savior. He served the Lord faithfully throughout his life as a Deacon, Sunday School Teacher, Choir Member and friend, and called West Lake Baptist Church his “home” for the past 28 years. After a long life lived, Herb is now celebrating with Jesus.

The family invites everyone to come celebrate the life of their beloved Herb Richardson.

In lieu of flowers, the family requests that donations be sent to the West Lake Baptist Church Student Ministries at 1439 FM 315, Chandler, TX 75758.

To send flowers to the family or plant a tree in memory of Herbert Richardson, please visit our Heartfelt Sympathies Store.

Receive notifications about information and event scheduling for Herbert

We encourage you to share your most beloved memories of Herbert here, so that the family and other loved ones can always see it. You can upload cherished photographs, or share your favorite stories, and can even comment on those shared by others.

Posted Jul 31, 2020 at 10:14pm
Herb was mentor to me as a young college coach. Not only was he a excellent coach, he was an even better man.
Coach Dwan Coleman
Comment Share
Share via:
BT

Posted Jul 31, 2020 at 04:35pm
Herb was one of the finest men I ever knew. He and Joann treated us like family and some of our greatest memories are the times we spent together. He leaves a legacy of so many virtues but the greatest of all was his love for Jesus and his family. My love and prayers are with Joann, Mike, Brady, Linda and Wayne. May God comfort and keep you is His care. Love to all - Becky Buchanan Tarrh.
Comment Share
Share via:
KH

Posted Jul 31, 2020 at 01:50pm
We have lost a wonderful friend and Dogwood Sam Member when Herb Richardson’s time on earth came to an end. His friendly and welcoming smile will be missed by us all . Paula and Kenneth
Comment Share
Share via: 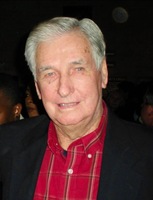