To share your memory on the wall of Dorothy Stewart, sign in using one of the following options:

Provide comfort for the family of Dorothy Stewart with a meaningful gesture of sympathy.

Print
Dorothy Inez Stewart passed away on April 10, 2020 in Tyler.

Mrs. Stewart was born April 9, 1932 in Calliham, in a home located in between two “Cotton Gins”, the daughter of Murphy Franklin and Thelma L. Rutherford Eliott.
<... Read More
Dorothy Inez Stewart passed away on April 10, 2020 in Tyler.

Mrs. Stewart was born April 9, 1932 in Calliham, in a home located in between two “Cotton Gins”, the daughter of Murphy Franklin and Thelma L. Rutherford Eliott.

She was a born again Christian and following her Lords example, was baptized in the Frio River at Calliham. She married Roy Franklin Stewart on January 18, 1948 in Three Rivers by the pastor of First Baptist Church, The Rev. McCelvey. Two children were born to this union, Steve Warren and Darnell Thelma. In 1950 at the age of three, her brother Roger Eliott, would become a part of this family and in 1968 her nephews Zane and Dwain Coquat, at the age of 11 would also join the family.

Mrs. Stewart served the lord teaching his word in the nursery, youth and adult departments. She was a vacation bible school director and taught missions through the Woman Missionary Union. She served as a leader to the following missions organizations, Mission Friends, Girls in Action, Acteens and Royal Ambassadors. Dorothy had a heart for missions and in 1995 received a call from God to be a part of a great evangelistic effort in Kenya for two weeks. That same year, she and Roy would go for six weeks on a mission trip into Alberta, Canada with the Texas Baptist Retired Builders, to help build the Canadian Southern Baptist Seminary in Crockran, Alberta. They returned there again in 1997 to help build housing for students. They also went on many mission trips here in the states working with the Texas Baptist Retired Builders building churches.

They moved to Chandler in November of 1991 and in 1997 helped start Faith Baptist Church with help from Bro. Gerald Edwards and his wife Jane.

She was preceded in death by her parents, son, Steve Warren, great grandson, Aubrey Lane Parish and sister, Virginia Ayres.

To send flowers to the family or plant a tree in memory of Dorothy Stewart (Eliott), please visit our Heartfelt Sympathies Store.

Receive notifications about information and event scheduling for Dorothy

There are no events scheduled. You can still show your support by sending flowers directly to the family, or planting a memorial tree in memory of Dorothy Stewart (Eliott).
Visit the Heartfelt Sympathies Store

We encourage you to share your most beloved memories of Dorothy here, so that the family and other loved ones can always see it. You can upload cherished photographs, or share your favorite stories, and can even comment on those shared by others. 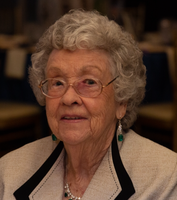