To share your memory on the wall of Bonnie Sanders, sign in using one of the following options:

Born September 21, 1927 in Trenton Texas to Jim and Alma Hicks. The role she most loved was that of a m... Read More
Bonnie Sanders of Dallas Texas, devoted wife and mother, grandmother, and great- grandmother left this world on November 22, 2019.

Born September 21, 1927 in Trenton Texas to Jim and Alma Hicks. The role she most loved was that of a mother and homemaker. She was an amazing cook and kept her home warm and inviting. She had various jobs throughout her life, working as a beautician and a Sears catalog operator when her children were young. Later in life she enjoyed selling real estate. Traveling and seeing the USA were a passion of Bonnie and her husband Charles. As a one time reluctant camper she grew to love the life once Charles got her a camper and eventually an RV and she was off the ground. She has visited all 50 states, many of them multiple times. She and Charles married in California, but returned to Texas and they later lived in Missouri, eventually returning to their home state of Texas upon retirement.

She is survived by her children, Ouida Brown (Tom), Chuck Sanders (Nancy) and Anita LeBeau (Kevin); nine grandchildren and six great-grandchildren. Preceded in death by her husband of 68 years, Charles Sanders, and her daughter, Bonita Cowdrey.

A graveside service will be held on Wednesday November 27, 2019, 1:00 pm at Chandler Memorial Cemetery, Chandler TX. In lieu of flowers donations can be made to the Glaucoma Foundation.

To send flowers to the family or plant a tree in memory of Bonnie Sanders, please visit our Heartfelt Sympathies Store.

Receive notifications about information and event scheduling for Bonnie

We encourage you to share your most beloved memories of Bonnie here, so that the family and other loved ones can always see it. You can upload cherished photographs, or share your favorite stories, and can even comment on those shared by others.

Posted Nov 27, 2019 at 11:22am
I have so many wonderful memories of Bonnie. She and my mother became close friends at Greenway Village. Bonnie was one of those people who always made you feel better just being around her. I will always remember her and her love 💗
Comment Share
Share via: 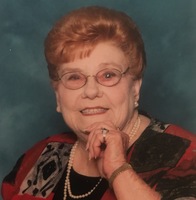