To share your memory on the wall of Vivian Walding, sign in using one of the following options:

Print
Memorial services for Sally Vivian Walding, 89, of Nacogdoches, formerly of Tyler will be held at 9:00 am, Wednesday, June 17, 2020 at the Chandler Memorial Funeral Home.

Mrs. Walding passed away on May 20, 2020 in Longview, Texas. Read More
Memorial services for Sally Vivian Walding, 89, of Nacogdoches, formerly of Tyler will be held at 9:00 am, Wednesday, June 17, 2020 at the Chandler Memorial Funeral Home.

Vivian was born June 17, 1930 in Century, Florida the daughter of Benjamin Leroy and Lottie Norene Black Ryals. She lived in Tyler and was married to James Loyd Walding for 56 years, until his passing on October 25, 2004. After the death of her husband, she moved to Nacogdoches to spend her final years. She will be missed by all those she knew and loved.

She was preceded in death by her parents and her husband James Loyd Walding.
Survivors include her daughter Chaurcley Rebecca and her husband Richard Carlton Cook of Nacogdoches; son James Kevin Walding and his wife Mary Beth of Carlsbad, California; grandsons, Austin Grant Cook and his wife Morgan Elizabeth of Plano, Texas and James Aaron Walding of British Colombia, Canada.

To send flowers to the family or plant a tree in memory of Vivian Walding, please visit our Heartfelt Sympathies Store.

Receive notifications about information and event scheduling for Vivian

We encourage you to share your most beloved memories of Vivian here, so that the family and other loved ones can always see it. You can upload cherished photographs, or share your favorite stories, and can even comment on those shared by others.

From Ed Gauntt and Allan, Natasha and Rebecca sent flowers to the family of Vivian Walding.
Show you care by sending flowers

Posted Jun 15, 2020 at 05:13pm
Thanking our Lord and Savior Jesus Christ for my wonderful mother and the blessing she was to so many. Kevin and Mary Beth Walding.

The FTD Cherished Farewell Arrangement was purchased for the family of Vivian Walding. Send Flowers

Flowers were purchased for the family of Vivian Walding. Send Flowers

From Ed Gauntt purchased flowers for the family of Vivian Walding. Send Flowers

Posted Jun 14, 2020 at 02:20pm
Chaurcley, Richard and Austin, we are so sad to hear of your loss. We pray for your comfort and peace. Peter Marshall once said
“Those we love are with the Lord, and the Lord has promised to be with us. If they are with Him and He is with us, they cannot be far away.”
Love, Flamen and Margie Ball
Comment Share
Share via:
AR

Posted Jun 10, 2020 at 06:06pm
Our love and prayers go to you Kevin, Mary Beth and the family. The joy of knowing as a Christian absent from the body is present with the Lord. Love 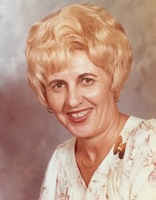