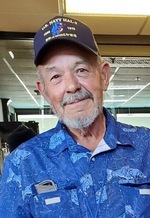 Russell Leroy Underwood was born February 2, 1945 in Wichita Falls, Texas the son of Philo Bengamin Underwood and Mae Sharp Underwood. He served our country in the US Navy for 20 years on the USS Bennington (ported in San Diego, California), in Helicopter Combat Squadrons 1 and 7 (HC-1, HC-7) and Helicopter Sea Combat Squadron 8 (HSC-8) (in San Diego, California), at Naval Weapons Evaluation Facility (NWEF) (at Albuquerque, NM), in Fleet Logistics Squadron VRC-50 (at Cubi Point, Philippines), and assistant to the Admiral of Naval air station, Kingsville, TX.

Most notably, Russell served as a helicopter door gunner with the elite Seawolves in detachment 8 in Vietnam from 1970-1971 and has a feature interview in the historical documentary "Scramble the Seawolves"; until his passing, he remained an active member of the Seawolf Association.

He retired from active duty service in 1983 as an E-8 Senior Chief. After his retirement from the US Navy, Russell went on to serve the Lake Palestine and surrounding areas for 37 years as the owner and operator of Underwood Heating and Air. He was an avid outdoorsman who would spend sunrise to sunset working outside. He enjoyed reading, loved to talk and spend time with his family. Russell cherished his grandchildren and great grandchildren and will be missed by all those he knew and loved.

He was preceded in death by his parents, three brothers and one sister.

Honorary pallbearers will be his Seawolves brothers.

In lieu of flowers, the family requests memorial contributions be made to the Seawolves Association by navigating to the following webpage: https://www.gofundme.com/f/seawolves-assoc-in-memory-of-quotwoodyquot-underwood?utm_source=customer&utm_medium=copy_link&utm_campaign=p_cf+share-flow-1

Arrangements were entrusted to the Chandler Memorial Funeral Home family.