To share your memory on the wall of Minnie Aaron, sign in using one of the following options:

Minnie Lee (Coke) Aaron was born December 1, 1934 in Legion, Texas in the midst of the great depression, the daughter of Bryan Lee Coke and Christine (McDonnell) Coke. Her delivery was assisted by a well-trained mid-wife. Minnie felt she had an excellent brain as she could learn just about anything she put her mind to do. Minnie’s father was killed by a car when she was five years old and her mother moved back to Kerrville to become the bread winner for the family. Her grandparents lived with them in Kerrville and were members of the First Methodist Church. Minnie was baptized when she was in the hospital with a ruptured appendix.

Minnie took piano, B-flat clarinet and twirling lessons to join the Tivy High School Band and became the head majorette. After graduating high school, she attended business school in San Antonio where she completed Executive Secretary training. She married Barney Aaron in September of 1953 and moved to San Marcos where her husband had a college scholarship. Minnie passed a civil service test and worked at Edward Gary AFB and Randolph AFB. After Barney’s graduation, he entered the Air Force and completed flight training as a Bomber Pilot for the Strategic Air Command. They would move 11 times during the next 11 years and it was during this time they welcomed two sons and one daughter. Barney’s service escalated and he was gone from home for six months then home for six months. During this time, they lived on Fairchild AFB, which was Minnie’s favorite assignment. Minnie volunteered as Welcome Chairman for the Squadron and Wing. After reassignment, they were moved to San Antonio where Minnie returned to work for the Air Force. She retired in 1984. Minnie and Barney enjoyed camping and traveling in their RV. They moved to Chandler then to Tyler. Minnie loved cooking, sewing, swimming, Mah Jongg and the computer until hand tremors, back failure and Bingswangers disease changer her life. She never let the trials of life destroy her Christian belief. Her favorite music was “A Closer Walk With Thee”, “Unchained Melody” and “The Colonel Boogie March”. Her favorite flowers were iris’ and roses. She cherished the special occasions when Barney gave her a bouquet of roses and a veal marsala dinner.

She is preceded in death by her parents.

To send flowers to the family or plant a tree in memory of Minnie Aaron, please visit our Heartfelt Sympathies Store.

Receive notifications about information and event scheduling for Minnie

There are no events scheduled. You can still show your support by sending flowers directly to the family, or planting a memorial tree in memory of Minnie Aaron.
Visit the Heartfelt Sympathies Store

We encourage you to share your most beloved memories of Minnie here, so that the family and other loved ones can always see it. You can upload cherished photographs, or share your favorite stories, and can even comment on those shared by others.

Flowers were purchased and a memorial tree planted for the family of Minnie Aaron. Send Flowers 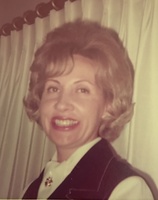