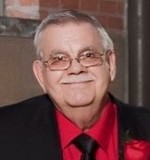 Lloyd Allen Carter was born January 26, 1941 in Herrin, Illinois the son of Riley Burt Carter and Florine (Pauley) Carter. He joined the United States Navy in 1959, proudly served on the USS Enterprise on its maiden voyage as an aircraft fueler and was honorably discharged from active duty in 1963 where he transferred to Reserve duty for several more years. Lloyd was a true Patriot who loved his country and enjoyed reading about World War history, was a member of the Mattoon Moose Club and Eagles Club. After his military service he began his career travelling all over Illinois hanging iron and was a longtime member of the Local 380 Ironworkers Union in Urbana, Illinois. His hobbies included playing cards, building things, spending time bird watching and especially enjoyed spending time with his family.

He is preceded in death by his parents; three brothers Riley “Butch” Carter Jr., John Carter, Ron Carter and one son John Carter.

In lieu of flowers the family would like donation made in his memory to the Wounded Warrior Project or Homes For Our Troops.